F1 on pedals, much more than a kid's game 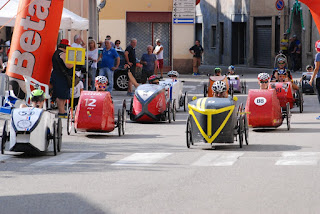 Hey bud, look at that grown up child still playing with pedal toy cars...
This may be a typical first thought of people seeing us ride our race four wheeled velos on the road. 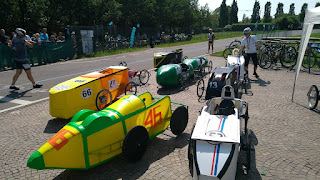 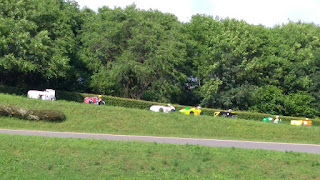 Formulies, toy pedal cars, quads, velomobiles, pedal karts, call them whatever you like: the point is that the conformism, the "mediocracy", all those behaviors with tribal origins that push people to mark with full disrespect all those things not belonging to preset categories or trendy stuff, act as a barrier against the discovery and appreciation of these really special vehicles.

Oh yes now you are thinking that I'm writing under the effect of quite heavy drugs... no no, actually I'm just lead by great enthusiasm. It's not just enthusiasm at first sight, though: it's been two years I'm participating at this "game for grown up kids", and I noticed other elements confirming that there is a series of reasons for all this enthusiasm.
The F1 pedal car championship here in Italy saw its birth well over twenty years ago, and it's still alive after the inevitable troubles that years bring with themselves. 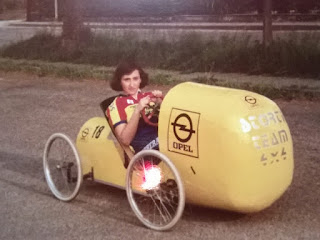 Another meaningful fact is that there are many other similar races, usually kept at local level, beyond our kinda official championship; in my opinion they would just need to do away with some shyness to enlarge the nice circus of the pedal car racing. 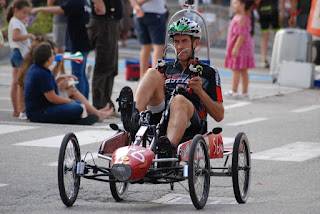 Also, there are at least two well known official championships at national level in European countries, France and Great Britain, with just slightly different rules but with the same common base as ours: racing pedal cars. 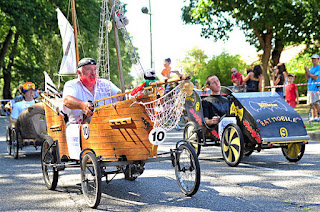 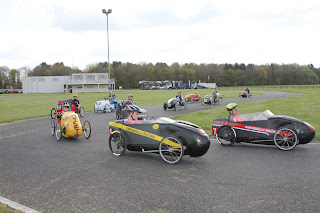 (pictures stolen from the internet...

Well, how could these cars be so special after all? Up to now I've written about F1 on pedals mainly from the point of view of competition; however I think that I'm sharing the opinions of most my fellow pilots when I state that simply riding them brings great satisfaction already. 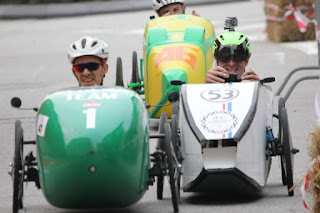 A relevant point is that all these cars are "specials": both if the pilots are the builders or if they have asked someone to build for them, the cars are all hand crafted creations usually dedicated to a single pilot. This fact alone creates a special bond between the pilot and his/her car. 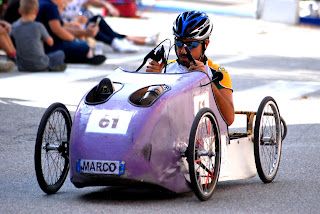 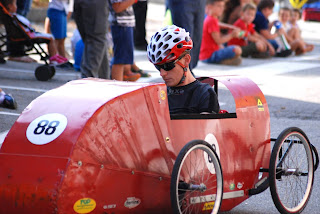 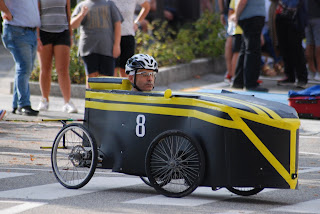 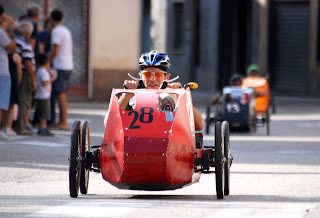 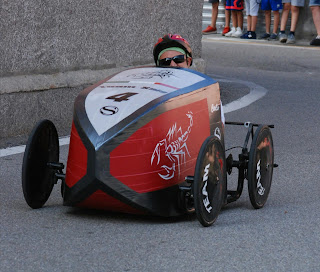 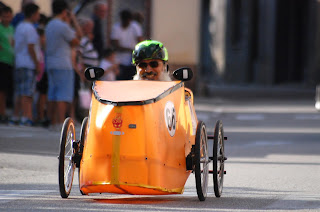 I believe there's a specific reason why many pilots are using pictures of themselves riding their pedal car as WhatsApp avatasr! And their avatars will be seen by everyone who have their contacts, not just by other pilots, I think this is meaningful about the value they give to this activity.
Moreover the customization of cars doesn't affect aesthetics only: it's surprising how wide the variety of different technical solutions is, showing how, despite the DIY designing and building level, there's research and development same as a much more professional environment. 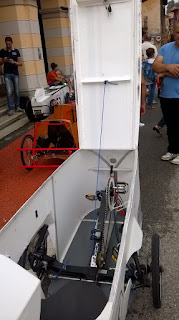 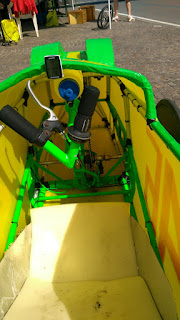 Of course another pretty important side is the simple pleasure of riding: pedaling in recumbent position, despite the dumb deeds of the UCI with their race rules, brings well known benefits to the riders, making the ride even more pleasant. 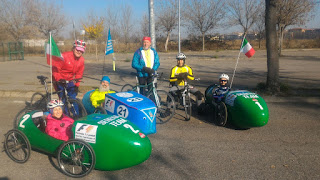 But it's not just a matter of riding pleasure: when you tuck into the body of your pedal car you get a feeling like it becomes a dress, or a suit... a suit made for running fast on the road, as fast as a diamond frame road bicycle, or even faster in the flatlands, provided the car's body has been well devised and built to be fairly aerodynamic. 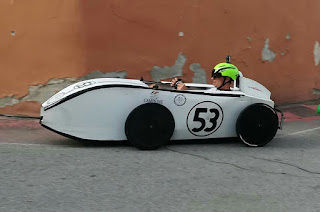 So here we're going on a higher level than bikes too: our "mechanical affection" in the common sense of riders is usually dedicated to the high level bicycle, or maybe to the motorbike of our dreams when we're youngsters, so much that we would keep them aside our bed at night (... at least until the bed we sleep in is single!). But the formulies are something we can actually wear, where we as pilots become the motor below the hatch and the driver at the same time. 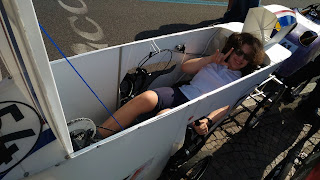 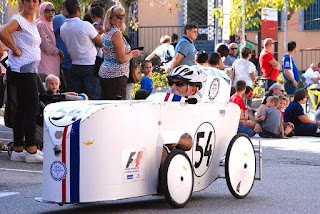 To be fully honest these thoughts, apart the garage level hand crafting, could be shared with velomobiles and streamliners as well: those carbon fiber shells running on three or two wheels respectively, devised to maximize aerodynamics and efficiency. Some of them are more oriented to tourism, some others for pure speed, "human powered torpedoes" as funnily named by the enthusiast youtuber John Williams. 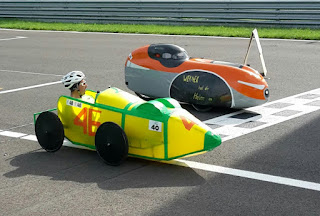 But the formulies do have something more. Oh yep they have something less as well, because the mandatory four uncovered wheels, plus the rear bumper and the restrictive length limitations of our rules, cause significant worsening of aerodynamics; however thanks to the very same four wheels, disposed at reasonable track width, we can enjoy the search of the grip limit with the same amusement as driving a go-kart, or in general any race car, in order to keep our speed high even in corners; even open roads are not made of straights only, where velomobiles tip over and roll, our cars still have a good edge. Yeah, better not make this an invitation to drive carelessly... but that difference becomes the safety edge in case of emergency. Not to mention what happens if we meet some oil on a wet road: if we're on four wheels we usually get out of that with some corrections, while on two wheels... fingers crossed!

I think now it's pretty clear that the value of these vehicles is far higher than any hypothetical scaled up toy pedal car, as many people could think at first glance. Nevertheless I can't keep myself from crying upon the fact that riding any kind of pedal powered vehicles on our roads is more frightening than going to war, despite the look of our cars attracts much more attention than common bicycles. Very few of us dare go training on open roads, even though there is no restriction with the laws, just adding lights reflectors and bell when not racing; it's a real pity because, just as in northern countries the velomobile is much more apprecieted and used, we may discover (and make many other people discover) that commuting with pedal cars is possible, distinguishing, and even slightly better than what common commuting cyclists do... the ones who made George Wells write the famous aphorism «every time I see an adult on a bicycle, I no longer despair for the future of the human race».

On those sundays when there's not racing, provided the weather is not tragic, I take out my pedal car and go training on the surrounding roads, and I notice that the thumbs-up I collect through car windows is far higher than scorns... and someone even stops to take videos! 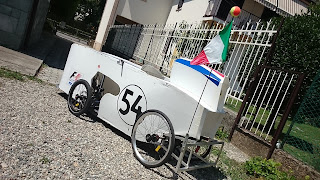 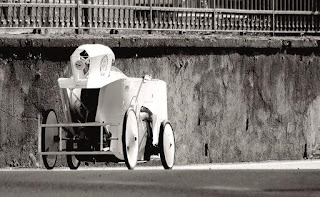 Last thing left to do now is to type the link to our official blog (Italian language only... sorry):
http://f1apedali.blogspot.com/
and invite anyone interested to enter this unmatched niche of bent riding!